“Barrios Unidos follows in the positive spiritual traditions of Gandhi, Dr. King, César, and Malcolm following his pilgrimage to Mecca. The story and example of Barrios Unidos is an inspiration to everyone in the movement.”

Listen to PPR for June 28, 2013 by clicking the link below or clicking on the grey arrow. (If you right click on the link you can download the talk to your computer and listen on-the-go.)

In this show, Stephanie and Michael talk with Daniel “Nane” Alejandrez, founder and executive director of Barrios Unidos, Santa Cruz about his vision of security, peace and empowerment that has created a worldwide movement of peace warriors, spiritual healing within the prison system, redefining masculinity and more. Show begins with segment on nonviolence in the news! 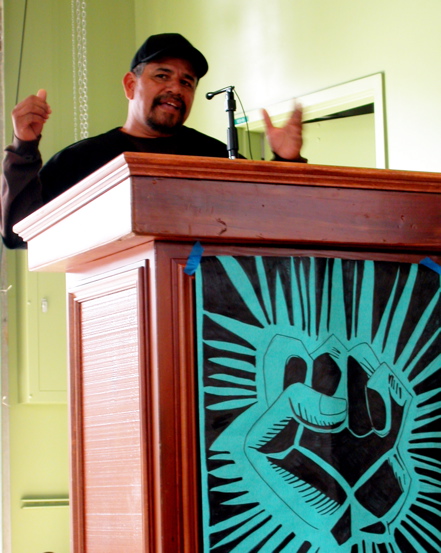 Daniel “Nane” Alejandrez is the founder and chair of The National Coalition of Barrios Unidos, a national anti-violence organization. Nane’s vision and work is focused on the survival and healing of all of those wounded through the madness of gang violence, drug and alcohol abuse, and the poverty and oppression of the barrio.

For more than 35 years he has worked in neighborhoods others have given up on, struggling to create a reality where young men and women can walk the streets without fear of being gunned down because of violence. Nane’s vision is the driving force behind the formation of Barrios Unidos—an organization whose message of nonviolence, positive spirituality, cultural awareness, and economic self-sufficiency has made an impact in the lives of thousands of people around the country, from barrio youth to officials in the highest levels of government.

Learn more about Barrios Unidos by visiting their website.