The revolutions within the Middle East that have sparked an awakened mass to move forward and use techniques of nonviolence have been an eye-opening moment in history. In spite of the violence of those seeking political power in Yemen, stories and scenarios of nonviolent action by Yemen’s persistent youth and pro-democratic protesters demonstrated a more promising form of power with the potential to not only get the right results but to make the world a better place. As we will see, their display of courage gives us much to learn for case study purposes. 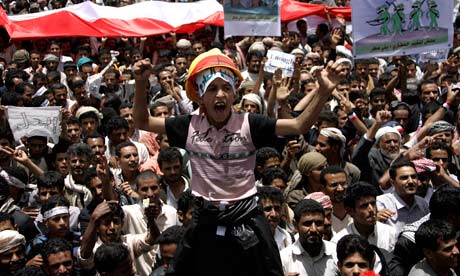 Yemen is a region that occupies the southwestern and southern end of the Arabian Peninsula. Bordered by Saudi Arabia to the north, the Red Sea to the west, and Oman to the east, it is the poorest country in the Arab world, undergoing struggles of unemployment even with its oil and water reserves. Almost half of its 23 million people live on two dollars or less a day, while one-third suffer from chronic hunger. With a president who has ruled for 33 years, Ali Abdullah Saleh, there is an obvious desire amongst its citizens for justice in the region. Since the first protests of the Yemeni people, a competition for the control of Yemen has dominated the political sphere. Such competitors have been Ali Mohsen, who is regarded as the most powerful figure in the military as Saleh’s former chief military advisor; Sheikh Sadiq al-Ahmar, the head of the Hashid Federation which is the president’s own tribe; the pro-democratic protestors; and president Saleh himself amongst his security forces and pro-Saleh loyalists.

Ali Mohsen gained recognition when he pledged to protect the demonstrators in Change Square. His announcement also led other officers supporting the opposition as well. Al-Ahmar is one of ten brothers who inherited leadership of the Hashid tribe in 2007 after the death of their father, Sheikh Abdullah, who founded Yemen’s largest opposition party known as the religious conservative Islah. Sheikh Abdullah was Saudi Arabia’s main ally in Yemen and his sons (the Ahmar brothers) maintain strong ties with the country. Although Ali Mohsen and the Ahmar clan gained prospective influence to lead if president Saleh stepped down, both men and backgrounds are looked upon with much suspicion. Islah has been accused of controlling the youth movements, as the founder of the Union of Movement for Independent Youth stated, “They think they can buy this revolution. We don’t trust them.” President Saleh in hopes to maintain power, has raised army and civil servant salaries, ordered income taxes to be halted, told ministers to control prices, and denied plans of both running for president and installing his son to rule.

These conflicting powers, besides the pro-democratic protesters, destroyed the potential for a nonviolent revolution to succeed and instead created one of civil war. Before such desire to dominate Yemen’s land, the oppressed pro-democratic citizens of Yemen began the early phases of the revolution with great strategic methods. Hubs of such action and protest primarily existed within Sana’a, Yemen’s capital; Aden; and Taiz. Such techniques used were ones recently seen in Egypt’s and Tunsinia’ revolutions that drew inspiration from Gene Sharp. There were of course the technique of protests such as on February 18, where tens of thousands of protesters marched towards the presidential palace chanting slogans despite riot police attempting to stop them; and February 25, known as the “Day of Rage” whereas many as 180,000 people marched the streets across the country, especially in Sana’a with approximately 30,000 protesters in front of Sana’a University.

Symbolic methods were used when 15,000 students and activists wearing pink ties on their heads formed a human wall at Sana’a University. According to Rudhwan Masude, who is head of the student union at Sana’a University, the color pink was chosen to represent the Jasmine revolution and to show that they didn’t want violence. “We didn’t give [the security] a chance to find fault in our demonstration or attack us like they did last time.” Other symbolic messages made were on April 1 where tens of thousands of pro-democracy protesters converged on Change Square in Sana’a and hung up posters of young men recently killed in demonstrations, and on May 6 known as the “Friday of Gratitude to the South,” where hundreds of thousands of protesters in the western part of Sana’a released balloons in pan-Arab colors with slogans calling for president Saleh to step down painted on them.

Human and material obstruction techniques were used such as on February 19 in southern Yemen where dozens of men used their cars in the town of Karish to block the main road between Taiz and Aden, shouting for the “fall of the regime;” April 6, when thousands of people again took the streets and in Kharmaskar, Aden where hundreds of students set up road blocks demanding the release of people detained earlier in the day and calling for officials to be tried for massacres against protesters in Sana’a and Taiz. Lastly, there was May 13 when thousands of protesters moved from their sit-in epicenter in Crates District to Seara in downtown Aden to surround the Provincial offices of civil service, social affairs and the local council. The crowds put heavy chains around the offices and replaced the original locks at the offices’ main gates. The police force kept aside as the protesters peacefully returned to their sit-ins after shutting down the governmental buildings.

Sit-ins similar to what is called “dharna” in the Indian Freedom Struggle occurred as well when 400 protesters staged a peaceful sit-in holding banners saying: “No to oppression. No to corruption,” on February 19. Remarkably as sit-ins increased a tent camp was formed that spread two miles long on May 13 without any reports of trouble or injuries. While protests remained students started sit-ins at Sana’a University. Tents were set up in front of the gates while thousands of people also staged sit-ins in cities of Ibb and Taiz on February 20. On the same day tribal representatives came from Arhab, Nahm, Anis, Shabwah, and Abyan to support the peace protests and sit-ins while engaging in traditional Yemeni dances with the students.

Such sit-ins led to the conversion of some people such as indigenous-tribal communities. Febrauary 20 wasn’t the only time tribal forces joined peaceful marches and sit-ins, the population of Al-Baida who are mostly armed tribesmen left their weapons behind to join pro-democracy protests. Al-Baida governorate, which is almost 300 km. south of Yemen’s capital, is a region where weapons are sold routinely in public markets. Ahmed Aramaan, a lawyer and activist at the National Organization for Defending Rights and Freedom (HOOD) stated, “ I saw tribesmen handing in their guns and kalashnikovs to security committees around the square and entering the protests without weapons.” According to Dr. Mohamed Al-Qadi, a political analyst, “This is a huge shift for a Yemeni tribesman to leave his arms and demands his rights peacefully, even if hurt.” Al-Qadi said that this has occurred not only in Al-Baida, but across a majority of tribesman nationwide as well. “Because they have suffered a lot from injustice, corruption and inflammatory wars among the tribes, they have resorted to peaceful means,” he said. Conversions like of the indigenous tribal men is not unheard of. This has been proven before with the Spartan raised Pathans led by Abdul Ghaffar Khan against the British , and a large portion of those in India who used nonviolent action against the British who didn’t actually believe in the moral rationale for it. Other conversions took place with soldiers such as on March 8 with army troops joining protestors on a day when one million people staged a protest in southern Yemen and across other cities like Sana’a; and on April 13 when approximately 10,000 soldiers from the republican guard defected and joined Ali Mohsen’s command.

Although strategies of nonviolent action played their role in a significant way, a peaceful transition of power turned into mayhem. On the day after president Saleh refused to sign the transition agreement, Sheikh Sadiq al-Almar declared support for the opposition with his armed soldiers who clashed with the loyalist security forces. Heavy street fighting occurred which included artillery and mortar shelling in which 120 people were killed. Along with the battle of Zinjibar, Yemen’s condition appeared to be one of civil war and by June 1 the death toll from street fighting in Sana’a alone had recorded 200. Attacks from either side went on from May 23 to June 7 with a final attack to the presidential palace injuring president Saleh, forcing him to leave to Saudi Arabia for treatment. Protesters in Sana’a celebrated the following news of the presidents departure. They chanted, “This is it, the regime has fallen.”

Third party influences have no doubt hijacked the revolution and although such military used by the Hashid Federation prevailed in forcing the departure of president Saleh. We have to ask ourselves what winning really means and what a true revolution would look like. The bullet of a gun does not differentiate between certain peoples, but the inner workings of the mind can. We must realize that when we hurt others, we hurt ourselves. A simple though powerful teaching can slowly disintegrate the cycle of violence from perpetuating itself. The youth of the Yemeni people adopting nonviolent strategies is the first step for revolution, but the real victory the Yemeni people and the rest of the world needs is to recognize a companionship amongst all to move forward for real change of human rights. Such a victory can be summed up in the words of Martin Luther King Jr., “One day we shall win our freedom, but not only for ourselves. We shall so appeal to your heart and conscience that we shall win you in the process, and our victory will be a double victory.”